What A Homeless Woman Taught Me About Life This Thanksgiving Season 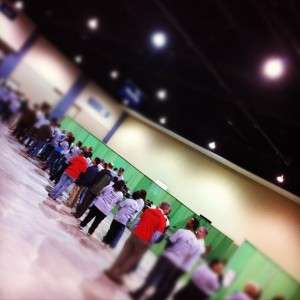 Waiting in line to be matched up with a homeless/at risk client with the other volunteers at Operation Homeless Connect 2011 at the Greater Richmond Convention Center.

I had the opportunity to take part in a great event put on by Homeward on Thursday. Project Homeless connect is an annual event put on by the organization where those who are homeless or at risk of being so are invited to the Greater Richmond Convention Center to get assistance, support and services.

I arrived early in the morning with several hundred other volunteers and received training on the process. Here’s how it worked: We all lined up inside the exhibition hall as the recipients we were about to meet lined up in the hallway. They were then let in and we were matched with a client at the entranceway.

We then sat down with them at a table, got to know a little about them and their background, and went through a checklist-style worksheet that allowed us to identify the services they most needed during their visit.

Clients could visit a doctor, optometrist, dentist (not to mention get on-site dental work), learn more about housing opportunities, apply for Social Security benefits, get information on employment and educational programs, receive clothing, enjoy a hot meal and much more at different stations set up around the exhibition hall.

We were told that some clients would come in briefly and do as little as just eat lunch, while others would make a day of it taking advantage of all services offered. I got a variety of both over the course of the day as I worked with three different clients.

This was more than just a run-of-the-mill volunteer opportunity where we were there to perform a task. We spent as little or as long as was necessary with each person, guiding them through the stations they wished to visit and staying with them the entire time.

I enjoyed getting to know all three people and learning more about what life was like from their perspectives. But my second client was the one that left the biggest impact on me that day. We’ll call her Jane.

Jane was a woman who was small in stature but big in personality. She made a several mile trek from the Church Hill area to the Convention Center on that cold November day to get help with several things. Jane had a kind smile and gentle demeanor, but was at the same time feisty and no-nonsense. In one word, she was strong. You see, Jane has five kids and is undergoing chemo for breast cancer. And living on under just $200 a month.

We spent a considerable amount of time together as she got the help she needed. And as we chatted over the course of three hours, I got a true sense of just what it was like to live in her day-to-day world. I’m often running short on money for this or that, when an unexpected bill comes in or what have you. But to hear how she stretches a couple hundred bucks and food stamps to make ends meet, endures the cancer treatments and tries to be the best mom she can to her five kids, I felt I could never say I was broke again. I counted my blessings.

We continued talking and she told me a story about how her youngest son, about 10 years old, got upset last year when he found out he wouldn’t be having Christmas, at least in the sense that we think of it with presents and other things we often take for granted. He was too young to understand why. As tears began to stream down her face, she told me how she wouldn’t be able to afford to give them a Christmas again this year, and how deeply it upset her. The tears welled up in my own eyes as she described the little things she’s doing to save a dollar here and there to be able to hopefully get her kids something this Christmas.

Now granted, the issues surrounding homelessness aren’t all black and white. Rather, they’re multiple shades of gray and are  comprised of both preventable and non-preventable factors, depending on the situation. I don’t fully know how Jane (or the other two people I worked with that day) wound up in her current situation. Whether it was her own fault or out of her hands completely, I’ll never know. Nor is it any of my business.

What I do know is however she got to where she is, she’s doing all she can to make a better life for her kids and she’s not looking for a handout (she was employed part-time until her cancer became too debilitating). She gave me the reminder that I think we all need from time to time, that even if we’re short on money or facing tough times, we have it pretty good and need to count and recount our blessings daily.

As we go into the Thanksgiving week, I’m thankful not only for what I have, but to have met Jane and the two others that gave me a glimpse into seemingly another world, right here in the same city as me.

As you get together with your family and friends to share a bountiful meal this Thursday, give thanks for what you have and take a little time to not only think about those less fortunate, but to offer an outstretched hand and do something actionable to make an impact, no matter how small, in the life of someone else.