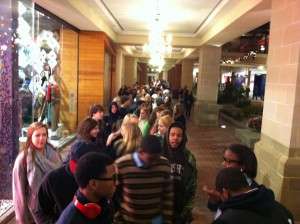 My photo of the line at Urban Outfitters that made it onto Mashable.

I’ve always hated shopping. Absolutely loathe it. I still have nightmares about being dragged through the JCPenney as a small child all Saturday at Regency Square. The few times I’ve been out doing it for more than a couple hours (which has usually been as the mercy of a bargain-hungry female companion), I’ve practically been able to feel my soul slowly departing my increasingly lifeless body. Jokes aside though, the one day I set this all aside has always been Black Friday. Something about that day has always made me set those feelings aside.

Whether it’s the adrenaline of fighting the crowds for merchandise or just being in the midst of chaos and enjoying some five-star people watching, I can’t be sure. But I’ve always been all about it, albeit just a day out of the year.

For years, the concept has been simple: Get to bed early and wake up around 3:00 or 4:00 a.m. and drive around Short Pump, snap some photos for my website and buy some stuff that I probably would have anyway and get a deep discount on it. Perfect.

But, alas, this year all of the big box retailers apparently had a secret roundtable meeting in which they decided that they were going to opening at midnight (and of course Walmart, in its typical “let’s one-up them all” style, decided to open at 10:00 p.m. Thanksgiving night). Workers required to leave family celebrations early in some cases (over 200,000 Target employees signed a petition against the early opening), which I can’t say I agree with.

Still, I decided to take my sister out for our annual tradition, at midnight. You know, because I love fighting crowds before the tryptophan has had time to wear off my sister asked me to take her.

So we rolled out of the house at 10:30 p.m. for what my sister claimed was an 11:00 p.m. opening of Urban Outfitters, the slightly out-of-place hipster retailer that happens to be in the heart of Prepville USA, beautiful Downtown Short Pump.

We were some of the first in line because, well, the store opened at midnight, not 11:00. So once I swallowed this wonderful news, we enjoyed the picturesque scene of two 12-year-olds smoking in front of us in line and another kid that wasn’t much older brown bagging it. Classy. 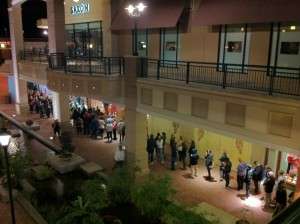 Anyway, so once the doors opened, these kids practically trampled one another, so they only let a few people in at a time and cut all the lights off in the store so no one could see anything. The logic of anything going on at this store was fleeting.

So having lost my sister at this point in the sea of insane teens practically killing one another over cheap clothes, I opted to hang out outside the store by the fire pit and think warm thoughts until she came out an hour later… literally.

Next it was on to Target, where the line of people had wrapped around the building an hour earlier, and adjacent Best Buy, which almost circled the building a time and a half. What these people were lined up for is beyond me, considering there was no hot item or toy this year to speak of. Most people coming out had TVs if I could find any one theme or pattern.

Once we actually got into Target (the outrageous line was gone at this point), it was worthless to even buy anything that was on sale, considering the checkout line weaved through about 15-20 aisles in the front of the store. Nothing was worth waiting in that.

So I guess to conclude, and to put all sarcasm aside, I was skeptical as to whether people would actually come out in droves at midnight as opposed to 3:00 or 4:00 a.m. like usual, but boy did they. In much bigger numbers, too. I guess will be the new normal. Heck in a couple years stores will be open 10:00 a.m. Thanksgiving Day, right?

The upside was that the following day, while the mall itself was pretty packed, Short Pump as a whole didn’t look much more busy than a typical Saturday around the holidays. Midnight shopping took care of the daytime crowds and effectively killed the typical gridlock of Black Friday morning.

Fortunately, I didn’t see anything like the crazy people at a Walmart that rioted over $2 waffle makers, but hey, my photo of the line at Urban Outfitters made it onto Mashable, which was pretty cool. Only thing I saw was a fight over a parking spot at the Short Pump Target. Three police cars showed up. It amazes me how people turn into animals over something so silly.