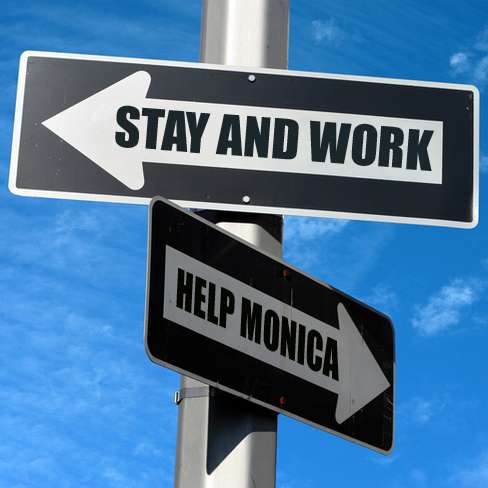 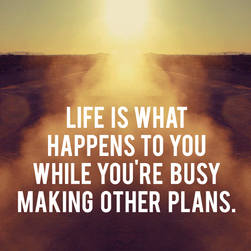 Life sure is funny sometimes. It almost makes you wonder if God himself has a sense of humor. When you look back on certain things, you realize it’s sometimes the smallest of decisions that end up taking you down certain paths. And it sure makes for a great story. I want to share one of those with you today.

It was mid September of 2009. I had just quit my job at a local computer company, where I managed a help desk at the University of Richmond and traveled around the state installing and servicing computers and printers for mainly educational clients to spend more time growing my web design and branding business and my news site, Downtown Short Pump. While working out of my favorite local coffee shop, I saw a tweet from a woman I’d never met before, desperately asking for help with her computer from someone nearby. Being that I was next door and had done this for a living, I decided to pop in to this woman’s store, By Invitation Only. It was there that I met Monica Horsley.

I spent an hour or so attempting to resolve Monica’s computer issues that day. Well it turns out there was more than one issue that needed taking care of. The next day, Monica asked me to come back and take a look at a few other things. The third day, she invited me out for drinks with her and the rest of the staff after work. We all really got along. She invited me back to do a few more things the next day.

Before I knew it, I got my first paycheck. I was officially working at a invitation and stationery store. I began helping with the graphic design and printing of everything from childrens’ birthday parties and graduations to rehearsal dinners and weddings. I even familiarized myself with the more than eighty vendor invitation books we had and began helping customers select wedding and other invitations when they came in the store.

Once the former manager quit and a couple others left for one reason or another, it was pretty much just Monica and I holding down the fort for a few months. I was doing so many things that, though I didn’t, I felt like I owned a part of the store. I had that kind of dedication to its continued success.

I stayed for just over two years at a job I was never really hired for– I just never left! But two weeks ago, I put in my resignation after accepting my new job at Loving Consulting. My last day was February 29, 2012.

It was a fun ride. Getting to work in a fast-paced retail environment with a clientele that expected nothing less than perfection definitely sharpened my skills physically, mentally, and socially. I was kept on my toes at all times. It had its ups and downs, but overall, I’m thankful for the experiences that helped mold and shape me that I otherwise wouldn’t have had if I had stayed at the coffee shop that day in 2009.

A lot of the people I met through Monica (one of the most connected people I’ve ever met) helped me to accomplish a lot for my business and connect the dots between myself and those that they knew to do the same. 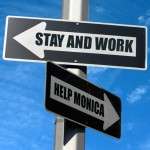 If you asked me two years ago if I’d ever either work in or get to know anything about the bridal industry, I would have looked at you and laughed. But I now know it inside and out, and I’m better off for it. And I never thought I’d be sitting here typing that.

What I’ve learned is that little, seemingly insignificant decisions can end up making the most impact in your life. If I had continued to sit in that coffee shop and not respond to that tweet asking for help, what path would I have taken? I have a feeling I wouldn’t have expanded my horizons the way I have or even ultimately made the decision to sell my website (and accept a position doing something I love while still getting to run my website), which ended up being one of the best decisions I’ve ever made.

It makes me wonder how many other small decisions I’ve made, even subconscious ones, that have lead me to where I am now. I guess John Lennon was right. Life’s what happens while you’re busy making other plans.

So, as I said once before, life sure is funny.